THE HISTORY, THE PEOPLE, THE PILGRIMAGE

Every year on October 30th  the town of Cagliari and Isili celebrate Saint Saturninus (San Saturnino), a local martyr. The legend says that Saturnino, a young man from Cagliari, was killed for not renouncing his faith and not submitting to those who professed paganism.

Religious celebrations in honor of San Saturnino, which is revered as the patron saint of the capital of Sardinia and beyond, have been present during past centuries in various municipalities in the region. In fact, San Saturnino is not only celebrated in the City of the Sun (Cagliari), but also in different regions of the island, this regional cult is a testimony of a custom that has become a natural practice but also an indication of the primordial role of faith plays among the Sardinians. In fact, the army also contributed to the massive spread of the cult of San Saturnino in Sardinia and today the pilgrimage route partially reconstructs the ancient roads and military bases of the past.

The religious consciousness and the strong devotion deeply rooted in the heart of the island and with the ardent desire to revive, in a participatory way, traditions who were in danger of being lost, in 2017 Il Cammino di San Saturnino was born. An itinerary that comes to life from the collaboration between the Athanatos Association and the Chelu e Luna Association: the former has long been involved in the organization of major cultural, historical and educational events; the latter was born with the aim of enhancing and highlighting the traditions of Sardinia. The historical re-enactment of the events that repeatedly marked the life of the Saint and involving eighteen municipalities in Sardinia, plus Milan and Rome, were studied and organized with a very specific purpose in mind.

Il Cammino di San Saturnino was developed from the desire to make  Sardinia’s many facets known. An itinerary that through initiatives that go beyond the promotion of our cobalt blue waters, divert attention to another type of beauty, the lesser-known and most evocative one – the island’s hinterland. A common thread between religious and popular traditions, which combines the metropolitan reality of Cagliari with the warmth and hospitality of the inland towns and villages.

Il Cammino di San Saturnino presents itself as the re-enactment of ancestral religious rites, an integral part of our culture, too often forgotten under the dusty blanket of time. The first edition in 2017 took place between Cagliari, Ussana, Gergei and Isili but currently Il Cammino embraces eighteen municipalities, who aim to enhance the historical, cultural, archaeological, touristic and environmental aspects of their regions, without forgetting the importance of sport, hiking and the use of bikes to visit otherwise inaccessible places.

A saint, many devout villages and a pilgrimage that becomes an opportunity to foster friendship and interconnections between these communities. A journey through various places and people to discover rites and traditions. An occasion where travel and religious devotion become a magical moment of encounter. A search for spiritual elevation and rediscovery of one’s inner self, transforming into a slow, experiential touristic itinerary, which involves not only all the social and economic facets of the territory but also the artisanal handicraft, the local agri-food and shepherding sector.

A kaleidoscope of colors, shapes and flavors that recall man’s need to reconcile himself with his land through the divine, thus rediscovering oneself.

With these characteristics in mind, a project has been established that has given life to an event that not only wants to restore dignity to the patron Saint of Cagliari, Isili and Ussana but also and above all add value to the lesser known regions of Sardinia. An initiative that aims to grow and involve the locals, the pilgrims, the curious and the many tourists in search of new experiences and destinations that are usually off the beaten path.

IL CAMMINO DI SAN SATURNINO
In the footsteps of San Saturnino, a pilgrimage for the valorization of folkloristic, religious, archeological, historical, touristic, environmental and athletic traditions 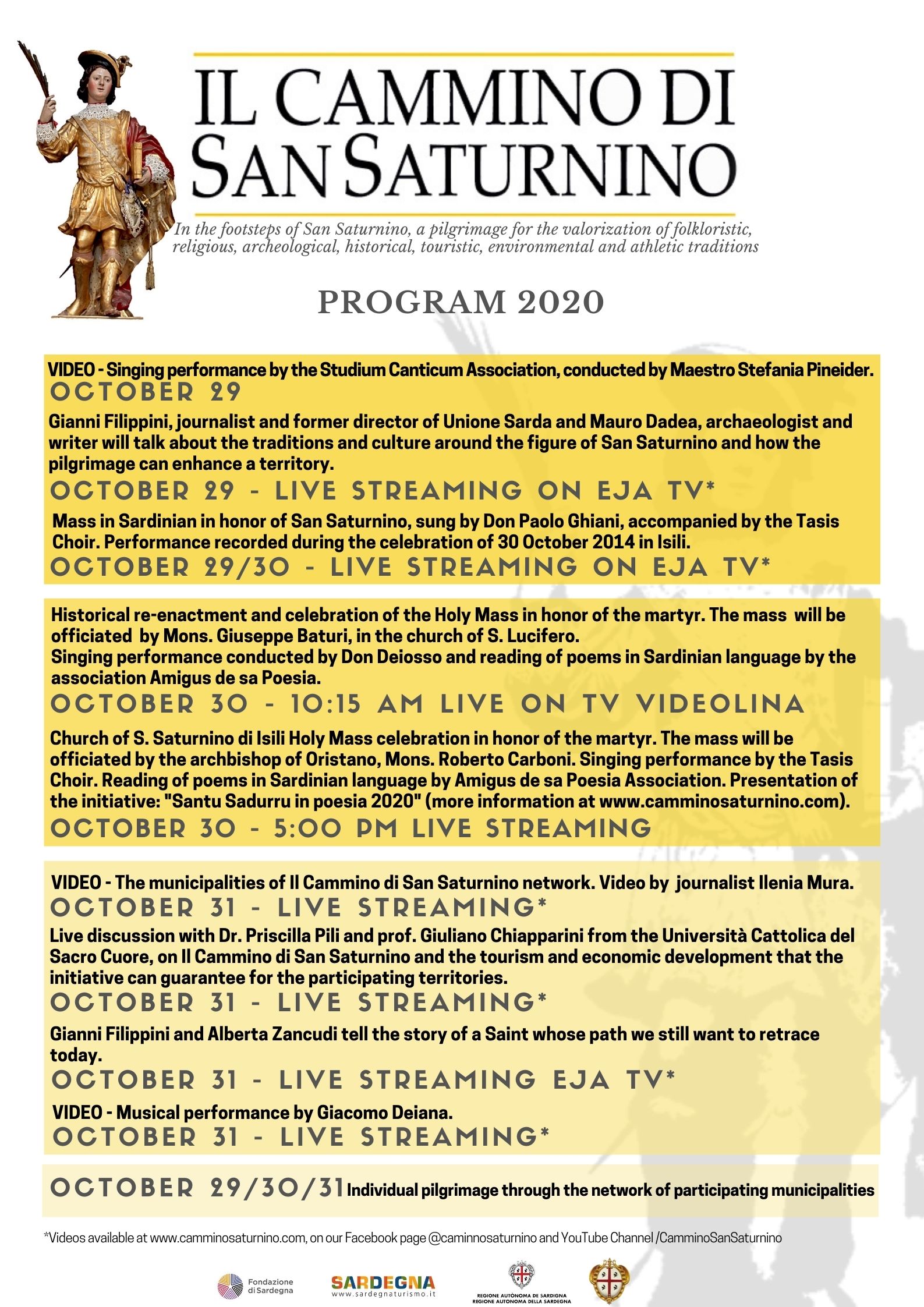